Reed Exhibitions remains number one, with both Messe Dusseldorf and Messe Munich moving up the rankings due to event phasing

Leading advisers to the global events industry, AMR International has today released its second “Top 20 exhibition organisers”  the only ranking by 2016 exhibition organising revenue. It also includes the first half (H1) of 2017 M&A activity.

Denzil Rankine, Executive Chairman, AMR International said, “Within the top four organisers, Reed Exhibitions and Messe Frankfurt have focused on organic growth and international expansion through geo-clones, while last year UBM and Informa cemented their positions through the acquisitions of Allworld and Penton.” 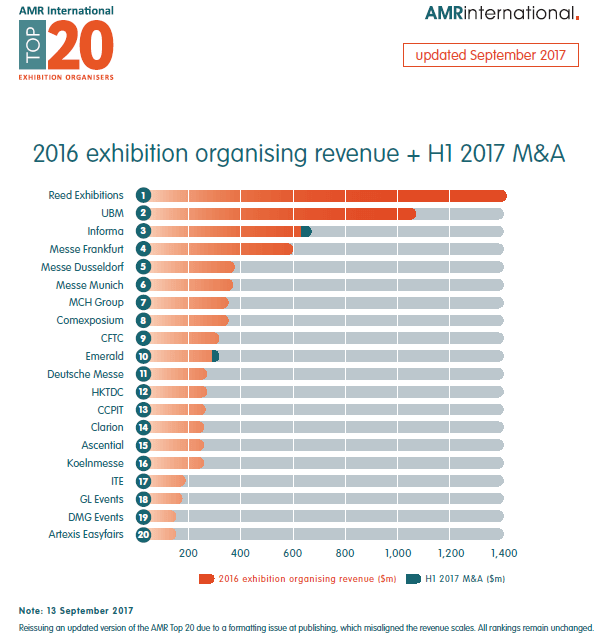 Denzil added, “Apart from Informa’s acquisition of the portfolio of Yachting Promotions Inc. and the tech-focused events acquired by Emerald, the first half of 2017 has not seen any sizeable M&A activity. Nevertheless, the trend to consolidation remains, as significant gains through organic growth continue to be challenging. And, while Clarion remained relatively unchanged, its new owner Blackstone is in a position to fuel further M&A activity, which could impact its ranking in 2018.”

The “AMR Top 20” is released every six months, and enables exhibition organisers to easily see how they rank in the global events market. It also helps organisers to track any shifts in market share, particularly ahead of the financial reporting cycle. In addition, the ranking presents an alternative view of the industry, isolating exhibition organiser revenues from venue rental and service revenues. Organisers are ranked on the latest fully reported year combined with pro-forma revenues of acquisitions.

For over 25 years, AMR International has developed unparalleled experience in the events industry. Today, as the events industry accelerates along its evolutionary path, AMR’s mission is to act as a guide for organisations seeking to navigate this change. AMR supports all facets of strategy, event lifecycle, data and digital, operational and transaction support. AMR is also a regular advisor to financial investors in the events industry, providing strategic M&A support in emerging and mature markets. AMR has offices in London, New York, Paris and New Delhi, as well as on-the-ground experience in 40 plus countries.